Butternut is too uncommon to be an important lumber species in Canada, though its wood is valued by wood workers. It has been identified as being a valuable mast (or nut-bearing) tree for wildlife. To identify whether you may be the guardian of one or more of these important and endangered trees, the following information may be of help.

The butternut is native to northeastern and northcentral North America. The species is widespread in Canada and grows in southern Ontario and Quebec, as well as in New Brunswick. Butternut is mainly encountered as a minor component of deciduous stands. It grows best in rich, moist, and well-drained soils and is often found along the edges of streams and rivers. In Ontario, the butternut generally grows alone or in small groups in deciduous forests. 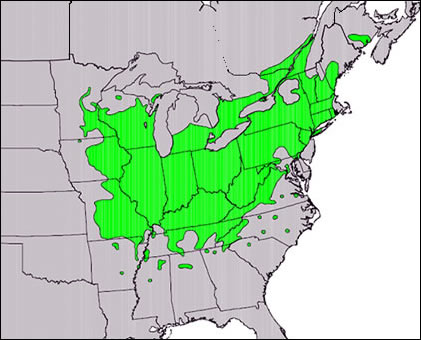 Map of butternut range in North America (adapted from USGS)

Butternut is intolerant of shade, meaning that it does not grow or reproduce under a forest canopy. Young seedlings and saplings can tolerate up to 60% crown closure. However, unless released in the early years of life, they lose vigour and die. Butternut is commonly associated with other tree species such as basswood, black cherry, beech, black walnut, elm, hemlock, hickory, oak, red maple, sugar maple, white ash and yellow birch.

It is important to understand that most of the land in Canada on which butternut exists is privately owned. The FGCA has made it a goal to raise public awareness and promote private interest and partnerships in the management and retention of butternut. Education is a key component to ensuring proper management and increased regeneration opportunities of this species. Open-grown butternut trees have a short trunk with a broad, open, spreading crown. In the forest, butternut have taller, less branchy trunks with a smaller, more compact crown. The smaller branches in the crown tend to bend downwards and then turn up at the ends. Butternut leaves are compound. They are about 25 to 40 cm in length and are composed of 11 to 17 leaflets arranged along a central stalk. The individual leaflets are stalkless. Their undersurface is densely hairy. The nuts are pointed, about twice as long as they are broad and about 5-7 cm long. Nuts occur singly or in clusters of 2 to 5. The husk is yellow/green with dense, sticky hairs. The nuts mature the same season as pollination and usually drop after leaf fall.

This species is monoecious, meaning that one tree bears both female and male flowers. The trees flower as they are leafing out. To prevent inbreeding the tree has evolved in such a way as to prevent the male and female flowers from maturing at the same time.